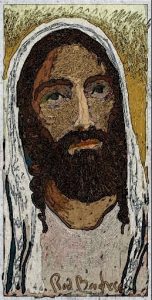 Conception of (the Jewish) Jesus of Nazareth, by Rod Borghese.

I was raised as a Unitarian Universalist and by a father who had studied religion for many, many years. He had a B.D. (what would now be an M.Div.) from Lancaster Theological Seminary, and he was raised in the German Reform tradition (now part of the UCC). He thought he might be a minister in that tradition, but his humanistic atheism made him decide otherwise in the end.

He discovered his first UU church in Los Angeles, where I was born. We moved to Pennsylvania and the whole family joined the Unitarian Church of Harrisburg, where I attended “Sunday School”.

In addition to the obvious influences (I went to divinity school and got my M.Div., and I am still a UU), there’s a lifelong influence that also came largely from my father. And that is that, like my father, I am very interested in trying to discover as much as possible about the historical Jesus. In fact, I’m probably more interested than he ever was. I am somewhat obsessed with learning as much as I can about the historical Jesus.

And it’s not easy.

As you probably know, Jesus (apparently) never wrote anything. The documents we have about him were written some time (often generations) after his death. And the documents and points of view are contradictory, and they suggest that in some cases details were fabricated to present a particular Christology and theology. It’s very hard to know what to believe.

I’ve read the canonical New Testament, and all the gnostic gospels (I think so, anyway). I’ve read many books that explore the historical Jesus. I’m in the midst of reading all the books on Jewish Christianity that I can; it is possible that these early “Christians” (who were unitarian and thought of Jesus as the Messiah — a human prophet) were the closest to Jesus’s perspective. But really, how can we ever know? The work of the Jesus Seminar is helpful, but it’s still mostly educated guesswork.

And so, my lifetime search for the historical Jesus continues.

This is cross-posted on my private website, Fool of Spirit.

Use this link when you order from Amazon and FCU gets a donation.